Home » »Unlabelled »
Among Albani's innovations in the Religion:

1. In his book Adab al-Zafaf he prohibits women from wearing gold jewelry - rings, bracelets, and chains - despite the Consensus of the Ulema permitting it.

2. He claims that 2.5% zakât is not due on money obtained from commerce, i.e. the main activity whereby money circulates among Muslims.

3. He absolutely prohibits fasting on Saturdays.

4. He prohibits retreat (i`tikaf) in any but the Three Mosques.

5. He claims that it is lawful to eat in Ramadan before Maghrib as defined by the Law, and similarly after the true dawn.

6. He compares Hanafi fiqh to the Gospel.1

7. He calls people to imitate him rather than the Imams of the Salaf such as the founders of the Four Schools, and his followers invalidate the hadiths that contradict his views.

8. He prohibits the make-up performance of prayers missed intentionally.

9. He claims that it is permissible for menstruating women and those in a state of major defilement (junub) to recite, touch, and carry the Qur'an.

10. He claims over and over that among the innovations in religion existent in Madina is the persistence of the Prophet's - Allah bless and greet him - grave in the mosque.

11. He claims that whoever travels intending to visit the Prophet - Allah bless and greet him - or to ask him for his intercession is a misguided innovator.

12. He claims that whoever carries dhikr-beads in his hand to remember Allah Most High is misguided and innovating.

13. He invented a location to Allah Most High above the Throne which he named al-makân al-`adamî - "the non-existent place."

15. He published "corrected" editions of the two Sahihs of al-Bukhari and Muslim, which he deceitfully called "Abridgments" (mukhtasar) in violation of the integrity of these motherbooks.

16. He published newly-styled editions of the Four Sunan, al-Bukhari's al-Adab al-Mufrad, al-Mundhiri's al-Targhib wa al-Tarhib, and al-Suyuti's al-Jami` al-Saghir, each of which he split into two works, respectively prefixed Sahih and Da`if in violation of the integrity of these motherbooks.

17. He said: "Many of those who interpret figuratively [the Divine Attributes] are not heretics (zanâdiqa), but they say what heretics say," and "figurative interpretation is the very same as nullification (al-ta'wîl `ayn al-ta`tîl)."

18. He suggests that al-Bukhari is a disbeliever for interpreting the Divine Face as dominion or sovereignty (mulk) in the verse "Everything will perish save His countenance" (28:88) in the book of Tafsir in his Sahih: "Except His wajh means except His mulk, and it is also said: Except whatever was for the sake of His countenance." Albani blurts out: "No true believer would say such a thing" and "We should consider al-Bukhari innocent of that statement."

19. In imitation of the Mu`tazila, tawassul (seeking means), istighâtha (asking for help), and tashaffu` (seeking intercession) through the Prophet - Allah bless and greet him - or one of the Awliyâ' he declared prohibited acts in Islam (harâm) tantamount to idolatry (shirk) in his booklet al-Tawassul as did his friends Bin Baz and those who obey them such as al-Qahtani in al-Wala' wa al-Bara' and others, in flat rejection of the numerous sound and explicit narrations to that effect, such as al-Bukhari's narration of the Prophet - Allah bless and greet him - from Ibn `Umar - Allah be well-pleased with him -: "Truly the sun shall draw so near on the Day of Resurrection that sweat shall reach to the mid-ear, whereupon they shall ask (istaghâthû) help from Adam - upon him peace -, then from Musa - upon him peace - , then from Muhammad - Allah bless and greet him - who will intercede (fa yashfa`u)... and that day Allah shall raise him to an Exalted Station, so that all those who are standing [including the unbelievers] shall glorify him (yahmaduhu ahlu al-jam`i kulluhum)."

20. He denies that the name of the Angel of death is `Azrâ'îl and claims such a name has no basis other than Israelite reports, although `Iyad reports the Consensus on the Umma on it in al-Shifa'.

21. Like the rest of Wahhabi and "Salafi" innovators he declares Ash`aris, Maturidis, and Sufis to be outside the fold of Ahl al-Sunna and even outside the fold of Islam, although Allah Most High and His Prophet - Allah bless and greet him - praised them! Upon revelation of the verse "Allah shall bring a people whom He loves and who love Him" (5:54), the Prophet - Allah bless and greet him - pointed to Abu Musa al-Ash`ari - Allah be well-pleased with him - and said: "They are that man's People."4 Al-Qushayri, Ibn `Asakir, al-Bayhaqi, Ibn al-Subki, and others said that the followers of Abu al-Hasan al-Ash`ari - i.e. Ash`aris who were mostly Sufis - are included among Abu Musa's People for in every place that a people are affiliated to a Prophet, what is meant is the followers of that Prophet. As for Maturidis, they are referred to in the narration of the Prophet - Allah bless and greet him - from Bishr al-Khath`ami or al-Ghanawi with a sound (sahîh) chain according to al-Hakim, al-Dhahabi, al-Suyuti, and al-Haythami: "Truly you shall conquer Constantinople and truly what a wonderful leader will her leader be [Mehmet Fatih Sultan - Allah be well-pleased with him -], and truly what a wonderful army will that army be!" Both the leader and his army were classic Hanafi Maturidis and it is known that Mehmet Fatih loved and respected Sufis, practiced tawassul, and followed a Shaykh. Moreover, enmity against Ash`aris, Maturidis, and Sufis, is nifâq and enmity against the Umma of Islam as most of the Ulema of Islam are thus described.

22. In at least five of his books5 he calls for the demolition of the Green Dome of the Prophet's Mosque in al-Madina al-Munawwara and for taking the Prophet's grave outside the Mosque.

24. He considers it an innovation to visit relatives, neighbors, or friends on the day of `Eid and prohibits it.

25. He gave the fatwa that Muslims should exit Palestine en masse and leave it to the Jews as it is part the Abode of War (dâr al-harb).

27. He prohibits praying more than 11 rak`as in Tarawih prayers on the grounds that the Prophet - Allah bless and greet him - never did and in blatant rejection of his explicit command to follow the Sunna of the well-guided Caliphs after him.

28. He declares that adding more to 11 supererogatory rak`as in the late night prayer (tahajjud) is an innovation rather than an act of obedience on the grounds that the Prophet - Allah bless and greet him - "never ever prayed one hundred rak`as in his whole lifetime"10 although the Ulema agree that there is no prescribed limit to something which the Prophet - Allah bless and greet him - commanded without specifically quantifying it, and he - Allah bless and greet him - said in three authentic narrations: "Know that the best of your good deeds is prayer,"11 "Prayer is a light,"12 and "The night prayer is in cycles of two [rak`as] and when one of you fears the rising of the dawn, let him pray a single one."13 It is also established in many authentic narrations collected by Imam `Abd al-Hayy al-Lacknawi in the second part of his Iqamat al-Hujja `ala anna al-Ikthar min al-Ta`abbudi Laysa bi Bid`a that the Companions and Salaf prayed hundreds if not thousands of rak`as in every twenty-four hours!

29. He considers it an innovation to pray four rak`as between the two adhâns of Jumu`a and before Salat, although it is authentically narrated that "the Prophet - Allah bless and greet him - prayed four rak`as before Jumu`a and four rak`as after it."

30. He declares it prohibited (harâm) and an innovation to lengthen the beard over a fistful's length although there is no proof for such a claim in the whole Law and none of the Ulema ever said it before him.

31. He gives free rein to his propensity to insult and vilify the Ulema of the past as well as his contemporaries. As a result it is difficult to wade through his writings without being affected by the nefarious spirit that permeates them. For example, he considers previous editors and commentators of al-Bukhari's al-Adab al-Mufrad ("Book of Manners"!) "Sinful," "Unbearably ignorant," and even "Liars" and "Thieves." Of one he says: "There are so many weak hadiths [in his choice]... that it is an unislamic practice"; of another: "It is ignorance which must not be tolerated"; of another: "Forgery and open lie... His edition is stolen [from a previous one]."16 Such examples actually fill a book compiled by Shaykh Hasan `Ali al-Saqqaf and titled Qamus Shata'im al-Albani wa Alfazihi al-Munkara al-Lati Yatluquha `ala `Ulama' al-Umma ("Dictionary of al-Albani's Insults and the Heinous Words He Uses against the Scholars of the Muslim Community").

32. He revived Ibn Hazm's anti-madhhabî claim that differences can never be a mercy in any case but are always a curse on the basis of the verse (If it had been from other than Allah they would have found therein much discrepancy (4:82).17 Imam al-Nawawi long since refuted this view in his commentary on Sahih Muslim where he said: "If something is a mercy, it is not necessary for its opposite to be the opposite of mercy. No-one makes this binding and no-one even says this, except an ignoramus or one who affects ignorance." Similarly, al-Munawi said in Fayd al-Qadir: "This is a contrivance that showed up on the part of some of those who have sickness in their heart."

33. He expresses hatred for those who read Imam al-Busiri's masterpiece, Qasidat al-Burda, and calls them cretins (mahâbîl),18 i.e. millions of Muslims past and present including the likes of Imams Ibn Hajar al-`Asqalani, al-Sakhawi, and al-Suyuti who all included it as required reading in the Islamic curriculum.

34. He perpetuates lies if they detract from Ash`aris, such as his remark that Imam Sayf al-Din al-Amidi did not pray,20 although Dr. Hasan al-Shafi`i in his massive biography entitled al-Amidi wa Ara'uhu al-Kalamiyya showed that the story that al-Amidi did not pray was a forgery put into circulation during the campaign waged by Imam Ibn al-Salah against him for teaching logic and philosophy in Damascus.

35. He perpetuates the false claim first made by Munir Agha the founder of the Egyptian Salafiyya Press, that Imam Abu Muhammad al-Juwayni - the father of Imam al-Haramayn - "repented" from Ash`ari doctrine and supposedly authored a tract titled Risala fi Ithbat al-Istiwâ' wa al-Fawqiyya ("Epistle on the Assertion of Establishment and Aboveness").  This spurious attribution continues to be promoted without verification - for obvious reasons - by modern-day "Salafis" who adduce it to forward the claim that al-Juwayni embraced anthropomorphist concepts. The Risala in question is not mentioned in any of the bibliographical and biographical sources nor does al-Dhahabi cite it in his encyclopedia of anthropomorphist views entitled al-`Uluw. More conclusively, it is written in modern argumentative style and reflects typically contemporary anthropomorphist obsessions.

36. He derides the fuqahâ' of the Umma for accepting - in their massive majority - the hadith of Mu`adh ibn Jabal on ijtihâd as authentic then rejects the definition of knowledge (`ilm) in Islam as pertaining to fiqh but claims that it pertains only to hadith, 22 although the Ulema of the Salaf explicitly said that a hadith master without fiqh is a misguided innovator! And he defines the `âlim as "meaning, of course, the `Salafi' `âlim, not the `Khalafi [late Egyptian Shaykh] Ghazali'!"23 Al-Qurtubi said: "One of the knowers of Allah said: A certain group that has not yet come up in our time but shall show up at the end of time, will curse the scholars and insult the jurists"
Posted by Al-Ashairah at 2:33 AM 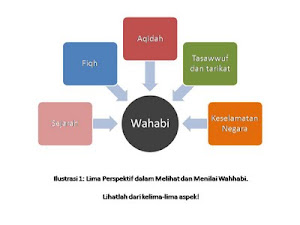 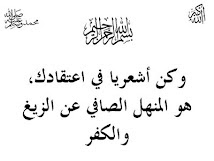 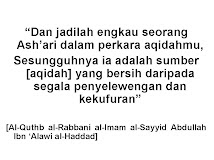